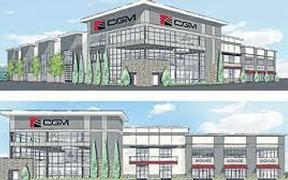 Classic Granite & Marble, a natural stone fabrication and installation company, plans to build a new headquarters in Powhatan County, according to a news release from Glen Allen-based Commonwealth Commercial Partners.

Classic expects to invest more than $10 million in the expansion, creating more than 100 jobs in the next five years.

The company purchased land at 17605 Midlothian Turnpike for $2.1 million. It plans to construct a 98,000-square-foot facility after it receives site plan approval from the county.

“Our goal is to be the largest natural stone fabricator and installer in the country and we have outgrown our current building,” Tony Kilic, Classic’s president and founder, said in a statement.

The company bought the property from Oakbridge Corp. The three-story facility will be near Classic’s current site on Justice Road. The new structure will include corporate offices, a showroom, and fabrication and warehouse space.

The purchased property includes than 25 acres. Classic’s facility will anchor a larger development, The Shops at Stone Village, which is proposed to include commercial and retail space.

Balzer & Associates assisted Classic with civil engineering and rezoning. Super Structures has been hired as the general contractor.