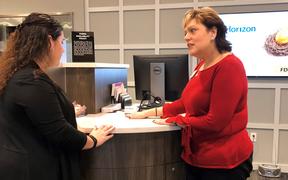 POWHATAN – Terry Awad said he would have been happy if the only thing he got out of his visit from Powhatan County’s Business Retention and Expansion team was help in getting access to high-speed internet for his business.

While other businesses around him were able to make that connection, he had been unsuccessful in getting it hooked up for his company, Fortune Auto, which manufactures performance suspension systems for Japanese and European vehicles.

A few weeks after assistant county administrator Bret Schardein reached out to him in September 2018 and asked how the county could help his Powhatan business, he connected Awad to the right people and the company had high-speed internet.

But it didn’t stop there, because the county’s economic development team – which consists of Schardein and Roxanne Salerno, economic development program manager – helped get Awad involved in a program that led to a free market research study and the potential for grants to attend trade shows to better market the company’s products.

Awad said he was never an anti-government person, but he also felt more often than not that it would be more of a hindrance than a help. The effort Schardein and Salerno have put into helping his and other local businesses changed that opinion.

“My attitude is 180. I didn’t even think something like this was possible,” Awad said.

While Awad’s results with Powhatan’s Business Retention and Expansion (BRE) program aren’t typical of every case of the county’s efforts to reach out to and help local businesses, they also aren’t atypical of the program’s purpose.

In summer 2018, Salerno and Schardein started setting up meetings with local business owners as part of a business visitation program. They knew there wasn’t a one-size-fits-all solution to helping each one of Powhatan’s 560 brick and mortar businesses (the number jumps higher with home-based businesses, which are also included in the program). The ultimate goal of the program is to help foster success and growth – which in turn can increase the county’s commercial tax base – but they also have to meet businesses where they are.

Some businesses have expressed interest in expanding – either their location or workforce. Some have random small issues that they need help getting resolved. Some need help making connections in the community. Others are fine now and don’t seem to need any help at this time.

“I would love for businesses to know we are coming in as an introduction of ourselves as well as a learning opportunity about their business. This is an opportunity for them to utilize us and learn things we can offer them,” Salerno said.

Salerno was hired in April 2018 and charged with focusing solely on economic development. While the BRE visits and efforts take up a good portion of her time, her role also includes assisting new businesses, promoting tourism, and site selection/attraction marketing to bring new business to the county.

One of the first things she did after starting her new position was create a comprehensive list of all of the businesses in the county, which hadn’t existed in this form before, she said.

From there, she and Schardein started setting up the visits. It starts with the basics – finding out what a business does and why they are in Powhatan.

“I have learned that Powhatan businesses are incredibly proud of where they are located. If you ask them why they are here, a lot of them are here because they have some connection. If you ask them what is best about having a business in Powhatan they say it is the community,” she said.

Those are simple questions that probably could have been answered in a survey. But what the staff members really wanted was a more in-depth dialogue with business owners about their needs, challenges, and hopes for the future, Schardein said. They wanted to connect with business owners and start building relationships – something that only comes when you begin meeting face to face.

“One thing we thought was critical was to not just say we sent out a survey to every business in the county but actually get out there and meet with them,” he said.

The ultimate goal is to take that information and turn around and use it in practical ways, Salerno said.

For instance, if a business owner complained about the sign ordinance and the cost of permits, staff made sure they knew the ins and outs to get the most use of the time they are allowed to have signs on display.

“Instead of losing their signs, which we want to avoid because those are not cheap, we want to help you better understand the sign ordinance and use it so you get the best use out of it,” Salerno said. “The last thing I want to see is a business to get a sign and lose it because they didn’t understand or use it properly.”

Staff have come across some businesses that needed to expand beyond their current space and, when they couldn’t find what they were looking for in Powhatan, had started looking in other counties as well, Schardein said. Helping them find new locations in Powhatan is a win-win for the business and county.

“We have had some businesses talking about when they do grow, in their current building they are at capacity. So, when they go to their next level expansion, whether it is next year or in three years or 10 years, they will need to look at a new building,” he said. “That is a great opportunity but it’s also an opportunity for them to potentially leave the county when they start looking at a fresh start.”

A huge concern among some local companies is having a good skilled workforce, Salerno said. Staff started working with Powhatan High School, which has a strong and growing Career and Technical Education program, to see about making connections that could result in internships, apprenticeships or jobs for recent graduates.

Of course, that doesn’t magically solve the problem. A large number of business said that not having affordable workforce housing in the county was a hurdle, Salerno said.

“I would say 75 percent of the businesses I meet with have workforce issues and say they can’t keep employees because they come, get trained and then quit and go back to work closer to where they live,” Salerno said.

Sometimes helping a business is as simple as contacting the local liaison with a utility company or other service provider to request their aid in solving a problem, Salerno said.

Awad said he had tried to work with an internet service provider that was servicing other neighboring businesses but he wasn’t having any luck. County staff knowing the right person to call took away a huge headache.

He was also blown away when the staff introduced him to the Virginia Economic Development Partnership, the state economic development department, and the results that have come from that. VCU graduate students studying international sales did a free market research project for him to determine which countries would be the best markets for his products. VEDP is also helping him apply for grants that could pay for going to trade shows and on trade missions in other countries.

Sometimes the introductions staff makes are between the local businesses. Salerno spoke about Brothers Three Coffee and Tea, a home-based coffee company that is now being sold and served at other venues in Powhatan because of some of those introductions.

Computer Upgrade King is a technology company that specializes in providing after-market upgrades to laptops and building custom gaming PCs. That means a younger workforce in the office interested in the benefits popular among millennials, said president Anna Hsu. One connection the county helped them make was in getting food trucks to come by the office once or twice a week, which was popular and good for morale. She was also personally introduced to the Empower Hour group for local business women, which has been a fun networking opportunity.

Hsu said the company is 10 years old, five of which have been in Powhatan, but the visits from Schardein and Salerno were the first times a local government had reached out to her business in that manner.

“It is a good connection to have. Because I know Powhatan is trying to attract more small businesses to come in, I think they are doing a good job by having this economic development team,” she said.

Michelle Walters, owner of Island Glow Sunless Studio, Salon and Beauty Bar, said she met with Salerno and Schardein earlier this month and they talked about her business, how it started and her current services. They also wanted to know how they could help with introductions to other businesses in the county that would be a good collaboration for both of them, she said. Walters added she likes the addition of the BRE program and thinks “it is exactly what will attract business to get more involved in the community and attract new businesses.”

The number of visits the economic development team can make in a month varies but is tied to several factors. Salerno is devoted full-time to economic development but Schardein has duties overseeing other departments.
One idea they tried last year was a BRE Ambassador program, which involved getting Powhatan business people to volunteer to meet with other local businesses, Schardein said. These volunteers start with more of the initial connection work and send on more in-depth needs to county staff. Schardein said they are extremely helpful, but because they have businesses of their own, it also can be hard to schedule meetings sometimes.

In 2019, Schardein said he hopes to expand the ambassador program and meet with more businesses, but only as long as they keep up the momentum of quality one-on-one meetings with local businesses.

“We don’t want to do it so quick that we can say we got out and met with 50 percent of the businesses this year but it was rushed and not meaningful. We want to be able to take the time and have that interaction, so we are looking at how we can do that,” Schardein said.

For more information about the county’s Business Retention and Expansion program, contact 804-598-5605, rsalerno@powhatanva.gov or Bschardein@powhatanva.gov.